Harry Styles wrapped up the first night of the Indio, California, music festival with a show-stopping setlist that included two brand-new songs and a surprise visit by Shania Twain.

Styles kicked off the night with his brand new single “As It Was,” followed by a set of classics from his sophomore album, Fine Line, including “Adore You,” “Watermelon Sugar,” and “Golden.”

The singer also played two tunes off his upcoming Harry’s House album (due out May 20), “Boyfriends” and “Late Night Talking,” which are apparently from his self-titled first album.

Styles also sang a solo version of his smash single One Direction. Before Twain, 56, joined him onstage to perform a few of her own songs, he sang “What Makes You Beautiful.” “I Feel Like a Woman” and “You’re Still the One” are two of her most popular songs.

“You’re Still the One” was previously performed by the former boy band member during a memorable New York City show as part of his first concert tour with Kacey Musgraves, who was the event’s opening act.

Twain, who was excited to perform alongside Styles, said: “I’m [at a] loss for words, I’m a bit starstruck … when I was writing this song, you were just a kid, so it’s kind of a dream and very surreal to be sitting right here now, singing this song with you.”

What are you thoughts? Let us know in the comments. 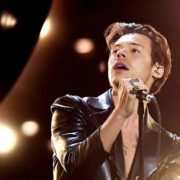 Lil Durk Halts His Show Because He Thought a Fan Has Been Injured, But They...

Miley Cyrus and Maxx Morando were seen kissing in West Hollywood Amid Rumored... Scroll to top